As Advent begins this weekend, I was reminded of a post I did two years ago.

This is an excerpt from it, and the original link can be found here:

It’s Christmastime. Right?
Wrong.
I will get back to this in a minute.
On Facebook, twitter, around media outlets in general, and in public, I keep seeing this thing.
People posting comments, or pictures, or links, or saying things that have to do with it being OK to say Merry Christmas.
The overall sentiment seems to be: “F-You, I can say Merry Christmas if I want to. Get out of my F-ing way. I WILL offend you. Intentionally. Thinking intentionally, I might offend you, and I’m gonna like it, so I’m gonna do it.”
Some of the people I see this from are Christians, and some are not. Both kill me. Really. But I’m not going to “talkback” to those who don’t claim to be Christians.
I’m going to “talkback” to the Christians.
One was shared that said:
“It’s okay to say “Merry Christmas & God Bless America”
Absolutely. It is okay. And I know there are those who want to say those things because they believe they bring joy, or they really do want God to Bless America, I in fact share these same sentiments.
And Hippy Dippy alert: I want God to Bless THE WHOLE WORLD. I warned you, so you can’t get mad.
But there is the majority, which are the sassy ones/people, demanding justice for our “rights” as Christians.
That idea our “Christian Rights” is another post, for another time.
And it is with those, and that school of thought that I take issue.
So, back to how I started.
It isn’t Christmastime.
Not according to Church History, and not according to the Church Calendar.
It’s Advent.
You may not have ever heard of it, and that’s our (Christians) fault, including me.
Here is the definition from dictionary.com:

noun
1.
a coming into place, view, or being; arrival: the advent of theholiday season.
2.
( usually initial capital letter

) the coming of Christ into theworld.
3.
( initial capital letter

) the period beginning four Sundaysbefore Christmas, observed in commemoration of the coming of Christ into the world.
4.
( usually initial capital letter

noun
1.
the annual festival of the Christian church commemoratingthe birth of Jesus: celebrated on December 25 and nowgenerally observed as a legal holiday and an occasion forexchanging gifts.
2.
Christmastime.
3.
Christmastide.
And just for kicks, Christmastide as well:

noun
1.
the festival season from Christmas  to after New Year’sDay.
2.
the period from Christmas Eve  to Epiphany, especially in England.
Origin:
1620–30; Christmas  + tide1
OK. A lot to deal with there. Mainly what I want to point out is that Christmas doesn’t start until Christmas Day. Up to that point we are in the season of Advent, of waiting for Christ to come into the world.
Of waiting, patiently, in anticipation and excitement.
So what if, instead of exercising our “right” to say Merry Christmas,
we exercise our “right” to WAIT?
Wait and patiently exude the hope that we have because this has happened:
10 But the angel said to them, “Do not be afraid. I bring you good news that will cause great joy for all the people. 11 Today in the town of David a Savior has been born to you; he is the Messiah, the Lord. 12 This will be a sign to you: You will find a baby wrapped in cloths and lying in a manger.”
Luke 2:10-12
If you believe the best way to share this hope and love and your faith is to say Merry Christmas at all costs, after looking deep down and into your soul, then that is between you and Christ, and I have to respect that.
What if instead, Christians claimed the season of Christmas. . .how out of the ordinary that would be. How outrageous, to say Merry Christmas after the commercial hoopla is done, and the presents are opened and the belly’s are stuffed, and we are in the midst of returning the sweater we didn’t want, or the earrings that are downright ugly.
What would that look like?
A little crazy. A little off kilter. And then someone might ask “What do you mean?”
And then we might have to “be prepared to give a reason for the hope we have within us”.
If we’re honest, its easier to say Merry Christmas when the rest of the world is saying Happy Holidays. When it’s socially acceptable  celebrate Christmas.
We get to bask in the glow of comfortable Christianity as the rest of the world acknowledges that it is “Christmastime”.
What I am going to try to adopt is this school of thought:
that my Lord and Savior saw fit to come to us humbly, as a vulnerable baby. And in doing that he was still so enigmatic, and so awe inspiring that the Angels came to sing, and the Shepherds came to bow.
It radiated through his humbleness.
I don’t think with that kind of Glory He is concerned with Christians exercising their “right” to say Merry Christmas.
But just for the heck of it,
Happy Advent one and all! 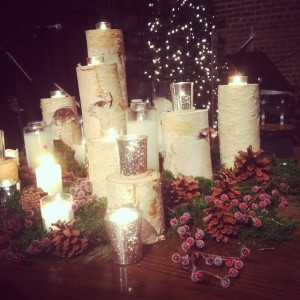