Today was an exciting whirlwind of an adventure. 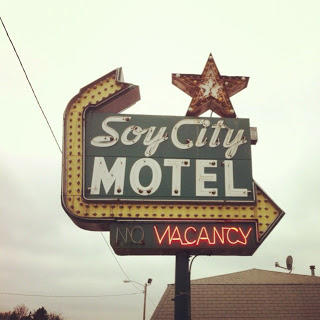 Deb asked if Eleonore and I wanted to join her and Wolfie on a thrifting jaunt to Clinton.

I figured we should just go crazy, and go all the way to Decatur.
(All the pictures are courtesy of her and her artistic self! )

You see, I have this odd love affair with Decatur. I lived there from the time I was four to third grade and for my freshman year of college. Those are pretty pivotal years in the development of a memory, of a personhood, at least they were for me.

It was hard as we made every turn, and drove past every place to not share with Deb the story that accompanied the particular place or street. We did some pretty great thrifting, and the kiddos behaved quite well.

What was more valuable than any physical treasure, was the remembering. Remembering where I was when I first heard of the Iraq war starting on the radio in the car. Remembering the thrift store that my mother would buy me clothes from that I would despise because a peer had told me “only poor people wear thrift store clothes” and I had an incessant need to tell people where my clothing was from, so if I wore it, everyone was going to know it was second-hand. I was going to tell them.

The thing that stood out to me most about my time in Decatur were all my different “educational” experiences.

I kept harkening back to my first experience at Glad Tidings in 1993. I was excited about the change, I thought I had a good handle on things.

One thought on “Back to Decatur”